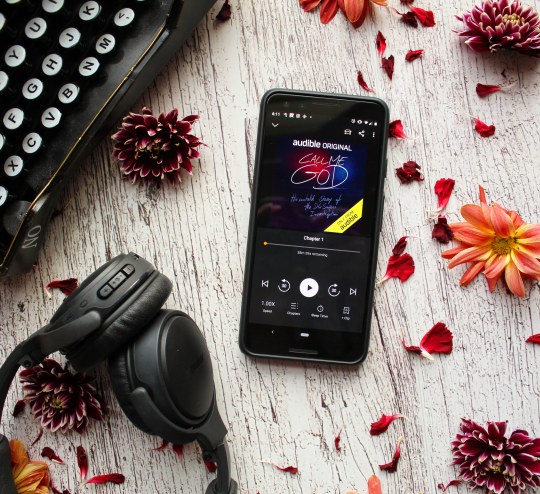 Inside Michael’s craft supply store, cashier Ann Chapman rings up another customer. Then it happens. A loud crack; a gust of wind; the light in register five goes dark.

Over the next 23 days, the entire DC area will be thrust into a reign of terror unprecedented in American history. Sniper attacks targeting and murdering everyday citizens will bring the entire region to its knees, as a nation still reeling from the recent attacks of 9/11 and the anthrax scare, are forced to confront a new type of brutal assault—this time in their own backyard. As law enforcement grapples with the mass carnage and chaos, media’s ravenous 24-hour cycle amplifies the very real fear, while steadily pumping new theories and bad leads onto a paralyzed public desperate for it all to end.

But who can stop it? And exactly how?

Call Me God is the never-before-told story of the fascinating and turbulent investigation that led to the diabolical and elusive killers’ capture; one that pitted protocol against instinct, sacred institutions against individual insight. Told firsthand by those few who had the vision and expertise to solve it, and including a fascinating look into the behavioral, ballistic, forensic, and electronic analysis vital to cracking the case, FBI agent brothers Jim Clemente (former FBI behavioral profiler) and Tim Clemente (former FBI counter-terrorism expert) take us through every facet and flaw of a nationwide manhunt that pressure tested nearly every aspect of law enforcement capabilities—and its glaring vulnerabilities.

Anchored by harrowing accounts from victims, intimate conversations with family members of those deceased, as well as candid accounts from those who knew the perpetrators best, relive the haunting events of the DC Sniper attack and piece together a true crime phenomenon that’s impact can still be felt today.

My thanks to Audible for sending me an advance copy of this audio book in exchange for an honest review. All opinions are my own and are not influenced by the publisher.

Audible always knows how to use the audio format to its full potential, and that’s really exemplified in this audio book, bringing the first hand accounts of people directly impacted by the DC sniper and those who helped investigate the case directly to the listener. I’ve said before on this blog that I have a hard time with some elements of true crime; it can be so easy for the genre to fall into the trap of feeling voyeuristic or exploitative. Call Me God keeps first hand-accounts in the forefront of the storytelling in a way that always feels very respectful and human. We must always worry about ethical storytelling when it comes to true crime and this was a great example.

Beyond that, though, it was just so very well done. I could not stop listening and binged most of this one in a day. (Coming in at just over 7 hours, if you’re like me and listen to audio books with the speed bumped up a bit, you’ll fly through this one.) I was 12 when the DC sniper was active, so I had a vague recollection of the case and not much more. Most of the info I learned here was new to me.

One of the more interesting aspects of the case, which I hadn’t considered before listening to this, is how the zeitgeist of the time period impacted the way people perceived the case. This came on the tail of the first anniversary of the 9/11 attacks; law enforcement and the general public had been on guard due to the symbolic power of a potential attack on that anniversary. Random acts of violence designed specifically to terrorize an already on-edge populace rendered the city a powder keg.

Call Me God is a must-listen for true crime fans! Between the detailed accounts of the investigators and the statements from those who lost family members, there is something of substance in this for everyone, regardless of your level of familiarity with the case going into it.

Lee Boyd Malvo (i.e., the DC Sniper) has been in the news again recently as he fights his life sentence without the possibility of parole. Malvo was a minor at the time of the crimes, and it has been ruled that mandatory life sentences for juveniles are unconstitutional. Let me know your thoughts in the comments; should he get a new sentencing? Are certain crimes too severe for rehabilitation regardless of age?

Check this title out on Audible.com! 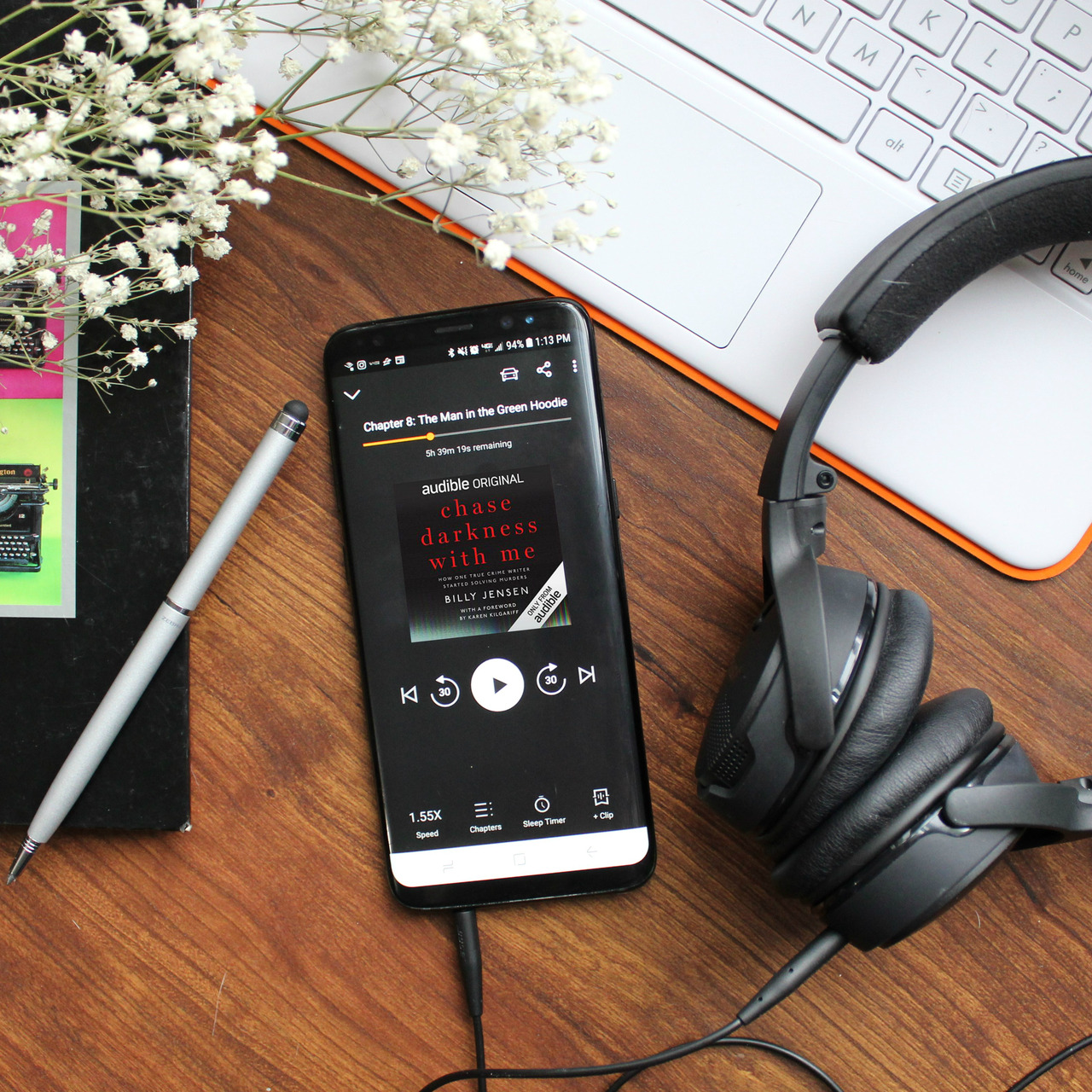 Chase Darkness with Me
by Billy Jensen

Have you ever wanted to solve a murder? Gather the clues the police overlooked. Put together the pieces. Identify the suspect.

Journalist Billy Jensen spent 15 years investigating unsolved murders, fighting for the families of victims. Every story he wrote had one thing in common – it didn’t have an ending. The killer was still out there.

But after the sudden death of a friend, crime writer Michelle McNamara, Billy became fed up. Following a dark night, he came up with a plan. A plan to investigate past the point when the cops have given up. A plan to solve the murders himself.

In Chase Darkness with Me, you’ll ride shotgun as Billy identifies the Halloween Mask Murderer, finds a missing girl in the California Redwoods, and investigates the only other murder in New York City on 9/11. You’ll hear intimate details of the hunts for two of the most terrifying serial killers in history: his friend Michelle’s pursuit of the Golden State Killer which is chronicled in I’ll Be Gone In The Dark, a book Billy helped finish after Michelle’s passing, and his own quest to find the murderer of the Allenstown 4 family.

Gripping, complex, unforgettable, Chase Darkness with Me is an examination of the evil forces that walk among us, illustrating a novel way to catch those killers, and a true crime narrative unlike any you’ve listened to before.

My thanks to Audible for allowing me free access to this audio book in exchange for an honest review. All opinions are my own and are not influenced by the publisher. This audio book is currently an Audible Exclusive.

True crime can be a touchy subject. What are the ethics of consuming someone else’s tragedy as entertainment? Jensen’s work and the way he works to essentially crowd-source murder investigations means that this book necessarily tangles with some of the thornier ethical questions surrounding true crime. The overall impression is of a man with deep respect for the wishes of families searching for answers about their loved ones; there is no hint of voyeurism or sensationalism.

Chase Darkness with Me explores Jensen’s early work as a journalist, working at the beck and call of news organizations and being told what to cover. After experiencing the shame and discomfort of being pressed to pester a grieving family for an interview, he decided to do things his own way, which would not involve sitting idly on the sidelines. Jensen began digging into unsolved crimes, using social media ads to blast targeted areas with surveillance footage, sketches of suspects, or whatever else he had to work with.  The method is simple but effective. Jensen walks the listener through the twists and turns of the cases he was able to help solve with the aid of the public and social media.

Michelle McNamara, author of I’ll be Gone in the Dark and friend of Billy Jensen, also plays a role in this book. Jensen was one of the writers who helped to complete I’ll be Gone in the Dark from Michelle’s notes after her sudden death in 2016. Chase Darkness with Me touches on Jensen’s friendship with Michelle and his efforts to ensure that her tireless research into the then unsolved case of the Golden State Killer was not wasted. Michelle McNamara unfortunately passed away before police ever made an arrest in the case, but Jensen was able to see his friend’s work come to fruition in 2018 with the arrest of James DeAngelo. (The official stance of police is that Michelle’s book did not have an impact on the case, but Jensen and many of Michelle’s fans have their doubts.)

The book is as much a call to action as it is storytelling, with an addendum outlining the do’s and don’ts for readers who may want to do investigative work of their own. Jensen’s rules place the wishes of the victims’ families at the forefront and also emphasize the importance of backing off when police have a suspect in their sights; the last thing anyone investigating a crime wants to do is give the culprit a heads-up that they’re being watched closely and cause them to run. While extra-judicial investigative work is necessarily controversial, Jensen clearly adheres to a strict set of guidelines which maximize his chance of being an asset rather than a liability.

Chase Darkness with Me is true crime at its best, told with utmost care and compassion for the victims of each case. It’s not true crime writing in the typical sense, as the author has inserted himself into these stories in a much more direct manner than most writers, but I think the writing is stronger for it. Each case is intensely personal to Jensen and this absolutely shines through in the final product.

Thank you for reading! Do you have any thoughts on the ethics of true crime writing? Please share your thoughts in the comments!