An article in The New Yorker detailing the dubious reputation of popular writer within the publishing world has been making waves recently. “A Suspense Novelist’s Trail of Deceptions” is a lengthy read, detailing the long and complicated personal history of Dan Mallory, pen name A. J. Finn, author of the breakout bestseller The Woman in the Window, which came out last year.

The main accusations stem around habitual dishonesty regarding health problems for himself as well as family members, with Mallory allegedly going so far as to lie about the death of a parent from cancer. Often this was done to garner sympathy and give Mallory an edge over other students, or, later, coworkers, to get time off work, and generally manipulate those around him. When he was thrust into the spotlight in the aftermath of his novel’s success, Mallory’s embellishments turned to his past accomplishments.

He said that, while he was working at an imprint of the publisher Little, Brown, in London, between 2009 and 2012, “The Cuckoo’s Calling,” a thriller submitted pseudonymously by J. K. Rowling, had been published on his recommendation. He said that he had taught at Oxford University, where he had received a doctorate. “You got a problem with that?” he added, to laughter.

Mallory doesn’t have a doctorate from Oxford. Although he may have read Rowling’s manuscript, it was not published on his recommendation. (And he never “worked with” Tina Fey at Little, Brown, as an official biography of Mallory claimed; a representative for Fey recently said that “he was not an editor in any capacity on Tina’s book.”)

The book blogging community, which had previously been gaga over The Woman in the Window, reacted with horror. Dan Mallory is the latest high-profile example, but readers (and consumers of all types of media) have long been grappling with the implications of the moral shortcomings of artists. With the advent of the internet and particularly social media, these issues are brought to forefront more and more often. From Ender’s Game author Orson Scott Card’s rampant homophobia to allegations of sexual misconduct by Maze Runner author James Dashner, the age old question is this: can we separate the artist from the art?

Put another way: Is consumption complicity? By making the choice to purchase, discuss, or even promote an artist’s work, are we, in some small measure, aligning ourselves with their behavior?

This all comes down to a matter of opinion, and for me, the answer is: “It depends… on a number of factors.”

1. Is the artist still alive?

This can be one of the biggest swaying factors for me. If the artist is no longer around to benefit from their fame and influence, the lines get a lot fuzzier in terms of moral failings I can dismiss long enough to read a book. The further you go back in history, the more this can become almost a necessity. If I’m reading the work of someone who died in 1925, odds are they held a lot of moral positions I don’t agree with. Values have (thankfully) changed a lot since then.

This doesn’t mean, however, that I feel I have license to shut my brain off while enjoying an older novel. As with any media, it’s important to think critically about implicit messages in the narrative.

2. Are you paying for their work?

Say the artist is still alive and kicking and I don’t feel comfortable giving them my hard-earned money. No, I’m not about to advocate for piracy. (You do you, though.) If I’m on the fence about an author morally, I may feel less qualms about borrowing the book from a library or a friend who already purchased it, or purchasing it second hand. If it’s a movie, maybe I’ll watch if it happens to be on TV, but I’m not going to run out to the theater or pay to stream it. Things that minimize how much money you’re putting in their pocket are going to change the equation.

3. Are you consuming media as a private consumer or an “influencer?”

Even if you’re not buying the work yourself, could you be influencing other people to do so? Maybe you got the book from the library, but then you posted a picture of it and gushed about how amazing it was to your 10,000 Instagram followers. I don’t have a huge audience, but I do try to be mindful of what I put out there if I’m aware of an issue with an artist.

4. Are the artist’s biases relevant to the work in question?

To me, this is equally important to the issue of whether or not they’re benefiting from my consumption of their work. I could find an abandoned copy of a book laying on the sidewalk, but if it was a novel with themes of love and acceptance written by someone who’d been outed for using racial slurs… I’m not going to read that. Compare that to visiting an art museum to view still life artwork by a long-dead artist whose attitudes about other races and women probably didn’t bear much of an impact on that painting of flowers in a vase.

I want to know what you think.

These are my opinions, but I think these things come down to a personal choice. What factors in relation to an author impact whether or not you’re willing to read their work? Are there authors you’ll pick up at the library but don’t want to support financially? Or do you choose what to read totally independently from your feelings about the author as a person? Let’s discuss! 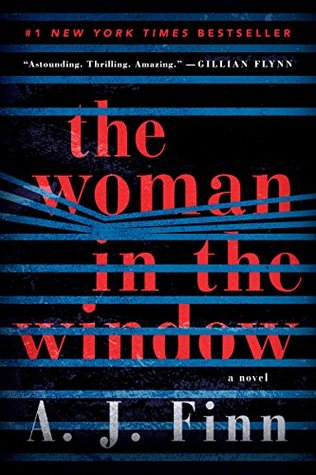 The Woman in the Window
by A. J. Finn

Anna Fox lives alone—a recluse in her New York City home, unable to venture outside. She spends her day drinking wine (maybe too much), watching old movies, recalling happier times . . . and spying on her neighbors.

Then the Russells move into the house across the way: a father, a mother, their teenage son. The perfect family. But when Anna, gazing out her window one night, sees something she shouldn’t, her world begins to crumble—and its shocking secrets are laid bare.

What is real? What is imagined? Who is in danger? Who is in control? In this diabolically gripping thriller, no one—and nothing—is what it seems.

This book was so hyped-up; I was seeing it all over the blogosphere for weeks and I was so excited to read it. Perhaps my expectations were too high; I liked this book, but I didn’t love it.

The Woman in the Window deals with some heavy issues: substance abuse, agoraphobia, and depression, to name a few, but the overall vibe is still rather fun. Anna Fox, the agoraphobic protagonist, copes with her isolation in two major ways: spying on the neighbors and indulging in old, black and white movies. The story is filled with references to classic Hitchcock films like Vertigo and Rear Window, both in the form of direct mentions as well as similarities in stories.

The Woman in the Window almost feels like a love letter to classic thrillers. If you’ve seen and loved many of these films, you’ll probably eat these references up. If you haven’t, they can start to feel almost excessive, in a way that’s reminiscent of the copious 80’s pop culture references in Ready Player One. (Although I’m not sure any book has quite as many superfluous references as Ready Player One does; let’s hope not, anyway.)

The climax felt a little bit cheesy, albeit probably intentionally so, as it again felt like an allusion to old horror films. And when I say cheesy, I mean there was a grandiose villain speech wherein they explained how/why they had done what they’d done. It felt a bit silly in a way that broke the tension at a point that could have been a truly spine-tingling scene.

There were a couple of major twists in this book, both of which seemed like they had a proper amount of foreshadowing in retrospect. (I suspected one twist ahead of time, and the other seemed obvious to me once it had been revealed.) The Woman in the Window may not shock you, but I can guarantee you’ll have fun reading along to see if your suspicions will be confirmed. Pop some popcorn for this one; it’s a quick roller coaster of a read!

Have you read The Woman in the Window? What were your thoughts? Have you read any other good thrillers lately? Please discuss in the comments!