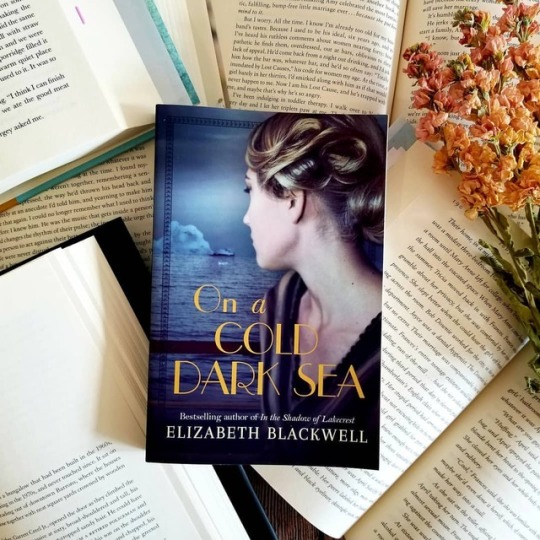 On a Cold Dark Sea

On April 15, 1912, three women climbed into Lifeboat 21 and watched in horror as the Titanic sank into the icy depths. They were strangers then…

Twenty years later, a sudden death brings the three women back together, forcing them to face the impossible choices they made, the inconceivable loss, and the secrets they have kept for far too long.

Elizabeth Blackwell’s On a Cold Dark Sea is a rather ambitious novel in a certain sense. It seeks to sketch out the lives of three separate women, each from varying backgrounds and social classes, over the course of 20 years, with the focal point being the moment their lives converged: the sinking of the Titanic. Charlotte, Esme, and Anna end up on the same lifeboat and their lives are forever changed in drastically different ways.

While I found each of these characters interesting in her own right, particularly Charlotte with her background of a life of crime sparked by her infatuation with a disreputable man, it felt like the novel did not have enough space to fully develop each women’s stories, with its length of less than 300 pages.

The twenty years between the sinking of the Titanic and the later part of their stories are largely skipped over, with some rough sketches of the intervening years filled in through the reminiscing of each woman in the later timeline. While recounting each of these twenty years for each woman would surely make for an overly long and tedious novel, I can’t help but feel like there was something missing.

However, there were some things Blackwell accomplished quite deftly in this novel. One of the running themes of the story is that of survivor’s guilt and the varying degrees to which different characters suffer from it. In a way, this can become a defining trait of a person, and Blackwell illustrates the wildly different ways this can manifest; can a sense of being unfairly spared lead a person to try to live a more virtuous life? What are the ways this niggling doubt can destroy someone entirely?

“It was very dark and very cold. We did our best in trying circumstances. We survived.”

These doubts are exacerbating in some cases by the lack of understanding from the general public. Blackwell draws heavily on historical resources to make this point. There are passages loosely based on the transcripts from the Titanic Disaster Hearings which exemplify how difficult it was for the survivors to express the pressures and panic they endured as the ship went down. Why were lifeboats deployed at less than half capacity? Why was a safety drill cancelled the morning before the sinking? How could any one person, having endured the chaos of unthinkable disaster, reasonably answer these questions?

Blackwell also seems to have a great interest in exploring the moral quandaries raised by some of the survivors. Again, drawing on real historical resources, she posits scenarios which are clearly meant to make the reader ask what they would do in the given situation. Survivors on the under-loaded lifeboat are forced to ask whether or not they should attempt to rescue passengers who are stranded in the water, fearing their boat may be capsized in the attempt.

Overall, this was an interesting exploration of a real-life disaster, but its length left it feeling a bit lacking. The story was atmospheric and the characters were interesting, but they could have been fleshed out more thoroughly than they were. The 20 years between the sinking of the Titanic and the remainder of the story feel a bit hazy despite Blackwell’s attempts at filling in the gaps. On a Cold Dark Sea is an enjoyable read, but had there been a bit more substance to it, I think it would have been truly great.

Thank you for reading! Do you enjoy historical fiction? Do you find yourself gravitating towards a particular time period in the books you read? Let’s discuss in the comments!

2 thoughts on “Review – On a Cold Dark Sea, by Elizabeth Blackwell”