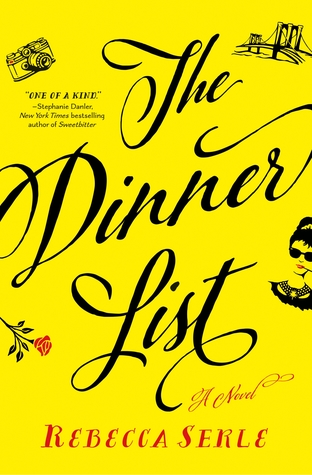 “We’ve been waiting for an hour.” That’s what Audrey says. She states it with a little bit of an edge, her words just bordering on cursive. That’s the thing I think first. Not: Audrey Hepburn is at my birthday dinner, but Audrey Hepburn is annoyed.”

At one point or another, we’ve all been asked to name five people, living or dead, with whom we’d like to have dinner. Why do we choose the people we do? And what if that dinner was to actually happen? These are the questions Rebecca Serle contends with in her utterly captivating novel, THE DINNER LIST, a story imbued with the same delightful magical realism as One Day, and the life-changing romance of Me Before You.

When Sabrina arrives at her thirtieth birthday dinner she finds at the table not just her best friend, but also three significant people from her past, and well, Audrey Hepburn. As the appetizers are served, wine poured, and dinner table conversation begins, it becomes clear that there’s a reason these six people have been gathered together.

Delicious but never indulgent, sweet with just the right amount of bitter, THE DINNER LIST is a romance for our times. Bon appetit.

The Dinner List was a quick read with an interesting premise. What began as a simple mental exercise with a college roommate (choose any five people, living or dead, to join you for one meal) suddenly becomes a reality on Sabrina’s 30th birthday. The result is an unexpected encounter with four people from Sabrina’s personal life… and Audrey Hepburn.

On its face, this seems like it would make for a light, fun read. Serle’s novel, however, drags her protagonist into a drawn-out exchange with people who represent a monumental amount of emotional baggage for her. Yes, even Audrey, in a way. While there are fun and light moments in the novel, it primarily feels like an analysis of where Sabrina’s life has gone wrong and if/how she can move on from those things.

While I enjoyed this novel overall, it felt like there was something lacking. I think part of the issue is that fundamental weirdness of Audrey Hepburn’s presence as the only person on the list Sabrina did not know personally. The presence of only one stranger, and such an iconic one at that, brought something of a lopsided impression to the plot that I don’t feel would have been there if there had been an additional stranger at the dinner. As it was, it felt a bit like a celebrity barging into an intimate family discussion.

The Dinner List has one bombshell of a plot twist (perhaps you’ll see it coming; I certainly didn’t) that changes the whole tone of the story when it hits. This book was an emotional roller coaster that ends with a glimmer of optimism and light at just the moment it began to feel too dark. Overall, a unique book that was worth the read.

I received an ARC of this book in exchange for an honest review. All opinions are my own and not influenced by the publisher.

Thank you for reading! Who would be on your dinner list? Discuss in the comments!

4 thoughts on “ARC Review – The Dinner List, by Rebecca Serle”