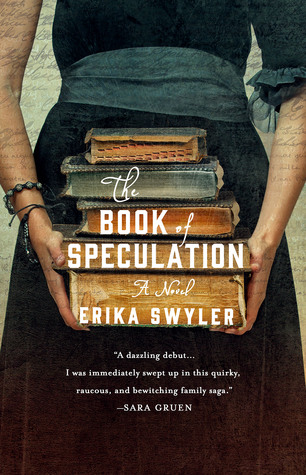 The Book of Speculation
by Erika Swyler

A sweeping and captivating debut novel about a young librarian who is sent a mysterious old book, inscribed with his grandmother’s name. What is the book’s connection to his family?

Simon Watson, a young librarian, lives alone on the Long Island Sound in his family home, a house perched on the edge of a cliff that is slowly crumbling into the sea. His parents are long dead, his mother having drowned in the water his house overlooks.

One day, Simon receives a mysterious book from an antiquarian bookseller; it has been sent to him because it is inscribed with the name Verona Bonn, Simon’s grandmother. Simon must unlock the mysteries of the book, and decode his family history, before fate deals its next deadly hand.

The Book of Speculation is Erika Swyler’s gorgeous and moving debut, a wondrous novel about the power of books, family, and magic.

The Book of Speculation follows two separate timelines; in the modern day, Simon is exploring a mysterious old book’s potential connection to his family, and this is interspersed with flashbacks to the traveling circus described in that book. The pace is rather slow and the story is very wrapped up in Simon’s emotional state and the loss of his parents years earlier.

Simon discovers while reading through the antique book that the women in his family, all performing “mermaids” in circuses with the ability to hold their breath for practically supernatural lengths of time, have a tendency to die young, all by drowning, and all on July 24th. With that date quickly approaching and Simon’s sister, Enola, in a mysteriously agitated state, the stakes are high for Simon. What started as a mere curiosity cements into a desperate quest to solve this mystery and save his sister, the only family he has left.

The characters were one of this novel’s biggest strengths. They are developed, colorful, and real. Some reviewers refer to Simon and “whiny,” which feels terribly unfair to me. Simon seems lonely and is dealing with the long term emotional fallout from losing his parents at a young age in addition to more than one crisis in the short-term. Simon is understandably distraught. His sister, Enola, seems fascinating and messy. The kind of woman who can run off and join the circus without looking back… which, incidentally, she did. The flashback characters from the travelling circus in the 1700’s are immensely colorful, almost cartoonish, but often with heart-rending backstories that make them sympathetic and not mere curiosities.

I felt like there should have been a bit more to the ending; after so much slow buildup, I wanted something more climactic. Overall, this book felt like it had some pacing issues and was lacking something, but still an enjoyable read.

If you read and enjoyed The Book of Speculation….

You may want to read…

The Ocean at the End of the Lane
by Neil Gaiman

Both books incorporate magical realism with two separate timelines and water central to the themes.

“Sussex, England. A middle-aged man returns to his childhood home to attend a funeral. Although the house he lived in is long gone, he is drawn to the farm at the end of the road, where, when he was seven, he encountered a most remarkable girl, Lettie Hempstock, and her mother and grandmother. He hasn’t thought of Lettie in decades, and yet as he sits by the pond (a pond that she’d claimed was an ocean) behind the ramshackle old farmhouse, the unremembered past comes flooding back. And it is a past too strange, too frightening, too dangerous to have happened to anyone, let alone a small boy.

Forty years earlier, a man committed suicide in a stolen car at this farm at the end of the road. Like a fuse on a firework, his death lit a touchpaper and resonated in unimaginable ways. The darkness was unleashed, something scary and thoroughly incomprehensible to a little boy. And Lettie—magical, comforting, wise beyond her years—promised to protect him, no matter what.”

Do you have a favorite book featuring magical realism? Any thoughts on the books in this post? Please share in the comments!

1 thought on “Review – The Book of Speculation, by Erika Swyler”