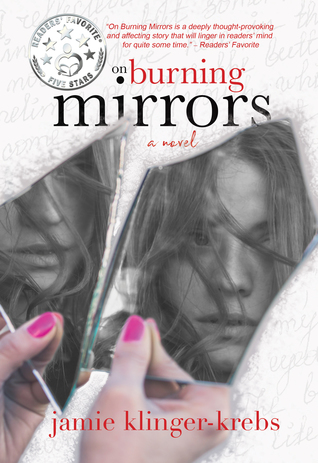 On Burning Mirrors
by Jamie Klinger-Krebs

Jules Kanter is a wife, a mother and a successful journalist; but she’s completely fallen for the subject of her latest story—a talented musician/bartender named Erin. While plagued with guilt over an affair that causes her to question her sexuality, coupled with the fear of hurting everyone she loves, Jules pours her emotions into her writing. But, she never imagined her words would be discovered when she wasn’t there to explain them.

I want to preface this review by saying that I seem to be in a minority opinion when it comes to this book; it currently has a very respectable 4.26 average on GoodReads, but I’d personally place it in the 2.5-3 range. So, if the premise sounds interesting to you, take my somewhat critical review with a grain of salt. This may also have to be a bit vague, as some of the issues that took away from my enjoyment of the book had to do with plot points rather than writing style. I will aim for only being specific in terms of plot when it comes to things that happen very early in the narrative; you won’t be reading any plot twists here.

I was cautiously optimistic going into this book. Representation was cause for optimism, but one half of the lesbian couple being dead from the word “go” tempered my excitement a bit. (Bury Your Gays, anyone?) Jules dies in a car accident on the way home from visiting her lover, Erin. The manner of her death may seem incidental, but to anyone familiar with the BYG trope, it may have thrown up some red flags. While it was a matter of a chance accident, the timing of the accident means that Jules’ death was an indirect result of falling in love with Erin. Gay characters often die in fiction as a direct or indirect result of their relationships; it’s depressing at worst, and simply overdone at best.

Jules’ death turns Erin’s and Will’s worlds upside-down. In order to better understand the woman they’ve both loved and lost, they attempt to work past their differences and begin to form a hesitant bond. It was interesting to watch this play out, particularly in terms of how Will’s character evolved from (in my opinion) a rather intensely unlikable person to someone who was trying to practice empathy despite his own heartache.

Erin evolved throughout the story as well, and easily becomes the best developed character of the novel, with a detailed background and significant growth. There was one major narrative blip when it come to Erin towards the end of the novel, which I won’t spoil here, but I will say that it felt jarring and unnatural and didn’t add anything of value to the story.

On Burning Mirrors is a story of secrets, grief, and healing. Erin and Will both struggle to find a way to move past the loss of a woman that neither of them feels like they ever truly had to begin with. It is a story of finding closure in the face of unexpected loss.

I received a free review copy of this book in exchange for an honest review. All opinions are my own and not influenced by the publisher.

2 thoughts on “Review – On Burning Mirrors, by Jamie Klinger-Krebs”