Daniel Daniels spends most of his time doing one of two things:
1. Avoiding the school bully, or
2. Hanging out with his animal friends.
Unfortunately, Daniel’s animal friends all live at The World’s Worst Zoo, run by the cruel and crabby Mr Gregory.
One day, an unfortunate incident with some ointment at the zoo leaves Daniel with a few special tricks up his sleeve‌—‌tricks that he can use to save the animals, and teach Mr Gregory a lesson. Curious, witty and sweet, this adventurous chapter book will charm and thrill the young and the young-at-heart!

Robbie Yates is an author based in the vibrant city of Melbourne, Australia. He enjoys the crunch of autumn leaves, and eating tasty snacks from his childhood.
In his free time, Robbie likes to read the stories of Roald Dahl, Paul Jennings and J.K. Rowling. Robbie also likes to go geocaching, play board games, and have water-balloon fights.

I’d once seen Mr Gregory try to teach the monkeys some tricks. I suppose he had been hoping that it would attract more customers to the zoo.

He was gesticulating wildly as he shouted commands. He was trying to get them to catch balls and clap their hands. The monkeys, of course, were not cooperating.

Mr Gregory didn’t think so. His response was to hold an enormous, luscious banana in front of the cage. Slowly, he peeled back each section of its skin. Before long, every single monkey’s eyes were fixed on the banana. Mr Gregory took one bite, groaned in satisfaction, chewed, and swallowed. Then, he yanked the rest of the banana out of its peel, dropped it on the ground, and stomped on it, grinding it into the dirt.

The monkeys were heartbroken. They hadn’t been fed for days.

One day, someone had complained about the birds squawking too much. Mr Gregory responded by eating his lunch in front of the aviary for a whole week.

“That’s not too bad,” I hear you say. Except that Mr Gregory’s lunch that week was chicken drumsticks.

“This chicken is delicious,” he had murmured. “I do love poultry. So tender and tasty.”

The birds got very quiet after that.

Hi! My name is Robbie
And I love writing stuff.
I blog some animations
Some poems and lots of fluff.
But lately, I’ve been working
On something bigger, too—
A book called Daniel Daniels
And the World’s Worst Zoo!

I’ve written it for children
A chapter book, in fact.
It’s written ‘bout a zookeeper
Who’s grumpy with no tact.
The main two in the story, though,
Are Daniel and his friend—
An elephant who’s lovely from
The start until the end!

I’ve always been a writer
Though never books like this.
I find that writing children’s books
Just brings me so much bliss.
I’ve two more stories coming;
They’ll be on Amazon.
But—on my blog there’s videos
And rhymes for free (a ton!).

I’m glad that I could visit
And author this guest post.
(For meeting fun new bloggers
Is one thing I love the most).
I hope you can come visit
If only for a while—
I’d be so gosh-darn happy if
My words could make you smile ☺ 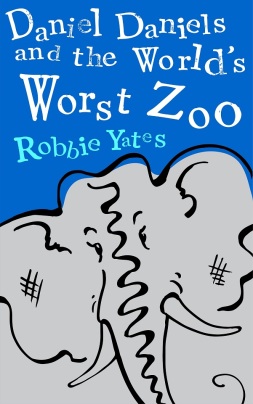