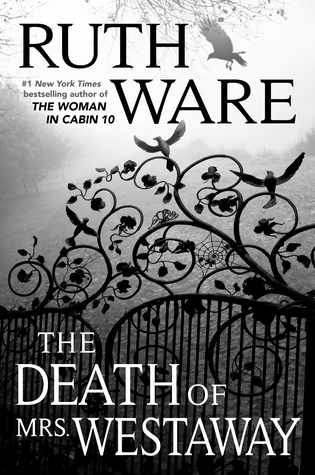 The Death of Mrs. Westaway
by Ruth Ware

On a day that begins like any other, Hal receives a mysterious letter bequeathing her a substantial inheritance. She realizes very quickly that the letter was sent to the wrong person—but also that the cold-reading skills she’s honed as a tarot card reader might help her claim the money.

Soon, Hal finds herself at the funeral of the deceased…where it dawns on her that there is something very, very wrong about this strange situation and the inheritance at the centre of it.

Oh, I wanted to love this book. And there was plenty to love. The book was atmospheric, transporting you directly inside Mrs. Westaway’s decaying, cavernous mansion.  Hal was a very well-developed protagonist and her complicated relationship with tarot and cold reading made her really interesting to read. Hal is a psychic who doesn’t believe in her own trade; this could easily make her an unsympathetic protagonist and turn off the reader, but life has backed Hal into a corner in a way that makes it hard to blame her. I’ll spare you any details that could be considered spoilers, but suffice it to say that Hal is desperate and doing the only thing she can to stay afloat.

This was enjoyable to read, but in the end, I felt a bit let down. The conclusion was far too heavily foreshadowed, to the point where I’d hoped the hints being dropped were red herrings, intended to distract. There were some aspects of the story which I was unable to guess, but these felt like minor details; the overall shape of the mystery became obvious before I was two thirds of the way through the book.

For a mystery novel to lack subtlety is such a fatal flaw. Ware’s writing is quite engaging, and I was enthralled to the end, but I spent that time waiting for a shocking revelation that simply never came. I have high hopes for whatever Ruth Ware’s next book turns out to be; I always have fun reading them, but I do hope she manages to surprise me next time.

Have you read The Death of Mrs. Westaway? Share your thoughts in the comments!

4 thoughts on “Review – The Death of Mrs. Westaway, by Ruth Ware”